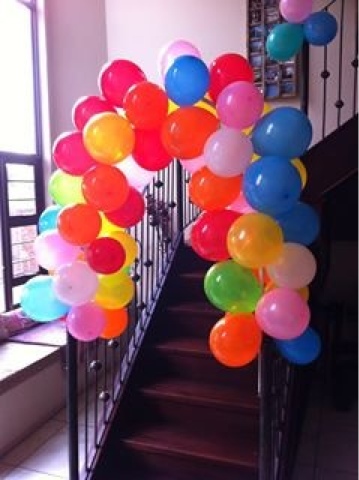 I just loooove to plan a party! And my daughter just looooves books, so for her 2nd birthday party we had a storybook party or in Afrikaans we called it “Partytjie in Storieland”. (This photo of the balloon rainbow is of the entrance to the party which we held upstairs in the studio.)
The invitations were in a book form, with popular tales as the theme together with her story: two years ago a sweet little girl was born… Her friends were invited to come and spend time with Lella in Storyland and to dress up as their favourite character. She was of course Red Riding Hood.
On the party table we had a basket(Red Riding Hood), for each friend on a personalised placemat, each one a different story picture. Inside the basket they found an apple (Snow White),a Gingerbread man cookie, Jelly beans (Jack and the bean stalk), a big lollipop (Hansel and Gretel), some popcorn and other goodies. The centre piece were a few books stacked with helium balloons tied to it.
Two year olds do not need much entertainment, luckily because it is a cold winter ‘s day and we have to keep indoors! We had storytime, and fantasy play: the plastic play house were he 7 Dwarfs’ house, the pink play tent were  Rapunzel’s castle.
The cake was in the form of a book with a photo of Lella and a picture of the Three Little Bears, (this time I had it made proffesionally) and it was delicious! For the adults we only had tea and coffee with the cake because the party was at 10am(tea time) and by finished by noon so that the little ones can be home for naptime.
Lella had a good time, although I don’t think she really understood what the fuss was about, but a very memorable day indeed! 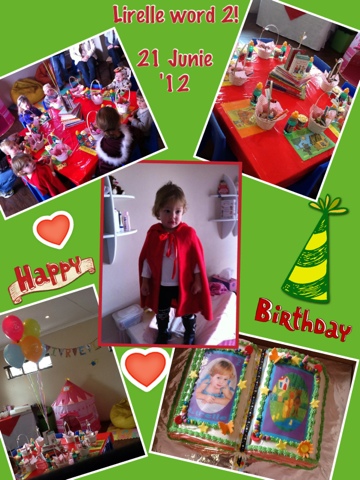